37 digital champions are making their debut in the CEE market. Discover the latest ranking of Digital Champions CEE 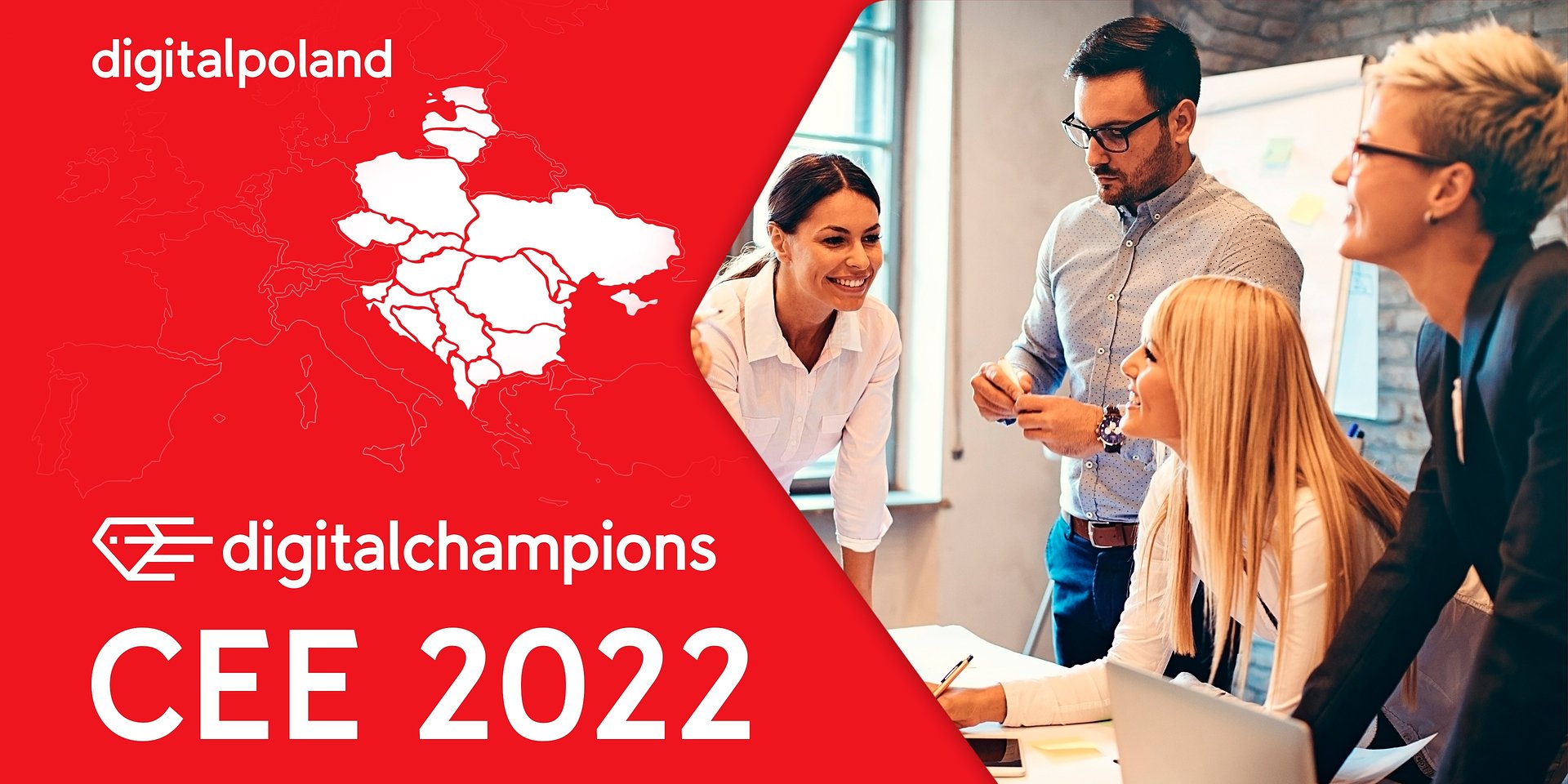 37 digital champions are making their debut in the CEE market. Discover the latest ranking of Digital Champions CEE

Central and Eastern Europe has added 37 new digital champions in the past year. This year's ranking of the 100 largest technology companies in CEE shows that we have managed to build a market that is resilient to turbulence. And although global market declines, mergers and acquisitions, high inflation, and on top of that the war in Ukraine have reduced the total capitalization of digital leaders by 43 percent, the region is catching up with the US capital market.

The Digital Poland Foundation has prepared the Digital Champions CEE ranking for the second time. The purpose of the ranking is to promote the region, create a platform for the exchange of experience between countries and encourage investment in technology companies. The ranking was created on the basis of transparent and up-to-date data and strict financial criteria. Experts assess the value of companies by taking into account current public market quotations, market benchmarks, EBITDA metrics, market multiplies as well as revenues. The champions include companies whose main source of profit is digital products and services or sales through digital sales channels. Data for the ranking was provided by specialized platforms Dealroom, Merger Market and Pitchbook, as well as more than 40 private equity and VC funds. The ranking presents digital champions in three categories according to their value:
· Digital Phoenixes - these are 20 companies with valuations exceeding $1 billion
· Digital Dragons - 40 companies with valuations of $250 million - $1 billion
· Digital Wolves - 40 companies with valuations between $100-250 million
The data and valuations on which the ranking was based are as of September 30, 2022. 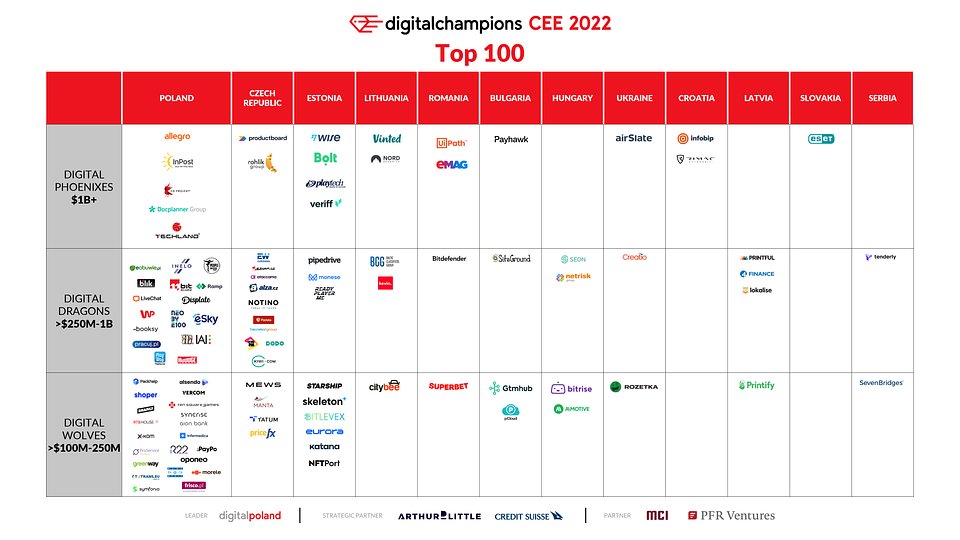 Poland, Estonia and Romania digital leaders of the region

In terms of the total value of digital champions, the region's leaders remain unchanged - Poland, Estonia and Romania. The combined valuation of companies from these countries is nearly $48 billion. Poland again topped the ranking, maintaining the highest capitalization value and number of champions. The value of 42 companies from Poland is nearly $23 billion. Among them are such companies as Allegro, InPost, CD Projekt, Docplanner Group, Techland, eobuwie and Wirtualna Polska.
– The Polish representatives in the CEE Digital Champions 2022 ranking reflect the entire spectrum of the Polish venture capital ecosystem. In the top positions there is no shortage of companies that enable local market development. Their executives invest independently as business angels or LPs involved in Polish funds. Meanwhile, employees who gain experience in these companies often use it to create their own ventures - explains Maciej Ćwikiewicz, president of PFR Ventures.
Estonia jumped to second place from third. Behind the country's success is a 60 percent increase in the number of champions and a drop in valuations in Romania. The total value of the country's 13 companies is nearly $17 billion, and among them is the highest valued company in the entire ranking - Wise. Estonia also consistently ranks first in terms of the highest intensity of champions in the CEE region. Third place went to Romania, whose technology leaders are valued at close to $9 billion, which mostly consists of the value of RPA software provider UiPath and e-commerce company eMAG.
The next three places in terms of owned champions are occupied by the Czech Republic ($8 billion), where companies such as Rohlik, Productboard and Notino come from, Croatia ($5 billion) from where Infobip and Rimac Automobili, among others, are based, and Lithuania ($5 billion) with companies such as Vinted and Nord Security.
As many as 7 countries - Albania, Bosnia and Herzegovina, Kosovo, Moldova, Montenegro, North Macedonia and Slovenia - have no company to join the ranks of digital champions.

Rising interest rates, the rise of the dollar to record levels and Russia's invasion of Ukraine were the biggest factors behind the 43 percent decline in the value of CEE digital champions, which fell from $130 billion to $75 billion in a year. Their success also contributed to the decline. Several companies, such as the $8 billion Czech Avast, dropped from the ranking as a result of acquisitions. In addition, many Ukrainian companies moved their headquarters and team to the US, for example. Were it not for these events, the capitalization would have fallen by 34 percent, the same as the US Nasdaq 100 index and significantly less than, for example, the Ark Innovation ETF.
– In these turbulent times, the 2022 edition of our flagship ranking brings a fresh look at the dynamism and resilience of the CEE region. CEE, it shows, is resilient in the face of adverse changes, and local entrepreneurs are battle-worn. And all this is happening at a time when the U.S. IPO market, is experiencing its longest drought in the last century - there hasn't been an IPO of a technology company with a capitalization of more than $50 million in the United States for almost nine months - comments Piotr Mieczkowski, managing director of the Digital Poland Foundation.
Proof of the resilience of the market is also seen in the number of new digital champions. As many as 37 companies made their debut in this year's ranking. Most were from the SaaS (16), Fintech (10) and e-commerce (6) areas. Estonia and the Czech Republic were the countries with the largest growth in the number of technology companies, up 60 percent. This also proves that CEE companies can create new value even in such difficult and uncertain times.
– The region's attractiveness is due to a number of factors, key to investors: a high population of more than 165 million people, stable and fast-growing economies that typically outpace mature markets in terms of growth rate, a large base of highly skilled ICT talent supported by science (STEM) education centers, and proximity to Western Europe. Central and Eastern Europe's GDP currently stands at $2.23 trillion, making it a larger market in size than the Nordics or Benelux – emphasizes Karim Taga, Managing Partner, Global Practice Leader TIME at Arthur D. Little.

Decrease in value of Digital Phoenixes

Although Digital Phoenixes still account for the bulk of capitalization in the overall ranking ($51 billion), this has dropped from nearly 90 percent to 68 percent within the last year. Poland ranks first in terms of the number of most valuable companies - it has as many as five. It is followed by Estonia with four champions and several countries with the same number of two Phoenixes - Croatia, the Czech Republic, Lithuania and Romania. Most of them were established between 2002 and 2006.
– The digital market in the CEE region has recently been affected mainly by the unfavorable macroeconomic situation and changes in global capital markets, including in the US. The deterioration of both macroeconomic conditions (a significant increase in interest rates, inflation and a decline in consumer spending) and political conditions (the war in Ukraine) has affected the valuations of technology companies, which on average have been cut in half compared to last year – explains Filip Berkowski, investment partner at MCI Capital. 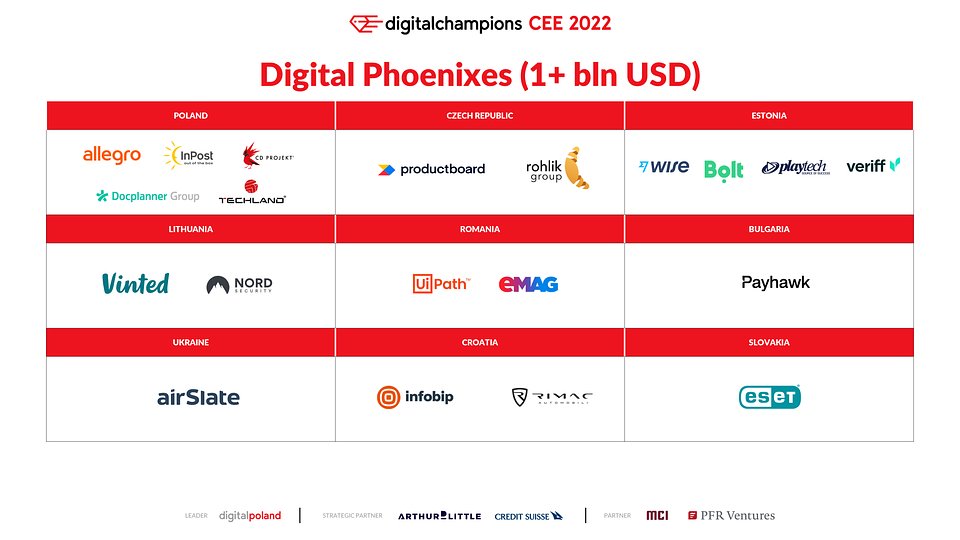 The report has received the honorary patronage of the EBRD. The strategic partner of this year's ranking is Arthur D. Little, the Partner is MCI Capital and PFR Ventures. The report can be downloaded for free from Digital Poland website (digitalpoland.org/publikacje and digitalpoland.org/en/publications)
POBIERZ RAPORT

The Foundation was established to increase the competitiveness of the Polish economy, with a particular focus on the area of high technologies and to promote economic awareness in society, as well as ideas of innovation, entrepreneurship and responsible development. It promotes knowledge on the role of innovation and digitalisation in the country's economic development. It brings together companies and organisations from various sectors, encouraging them to cooperate on specific projects. The Foundation's mission is to position Poland as a leading centre of digital innovation in the world. By promoting international and cross-industry initiative, combining forces, themes and networking, it mobilises companies to make the transition from offline to online. The Foundation invites anyone interested in undertaking innovative projects that will modernise the Polish economy to join.